This paper contributes to discussions on questions of method involved in Islamic Studies and builds on the work of Talal Asad and Alasdair MacIntyre in conceiving of Islam as a discursive tradition. My argument is that the mode of studying the Islamic sciences as carried out in the madrasas and traditional study circles represents a distinct practice. The conception of practice that I draw on explicitly is that of MacIntyre from his After Virtue, and using the writings of Asad I explore some of the dimensions of this practice, focusing on embodiment and the sense of self that is cultivated thereby. In the second half of the paper, I turn to the Modern Academic study of religion, Islam in particular. While scholarship has characterized the Orientalist enterprise in a variety of ways, in this paper I argue that Orientalism, like the practice of Islam in the madrasas, too is a practice. As a practice, the Modern Academic study of Islam has distinct forms of embodiment and senses of self that it seeks to cultivate vis-à-vis its object of study. Thinking along with MacIntyre, I explore distinct ways in which the modern academic study of Islam presents a challenge to (and is challenged by) the practice of Islam in the madrasas. 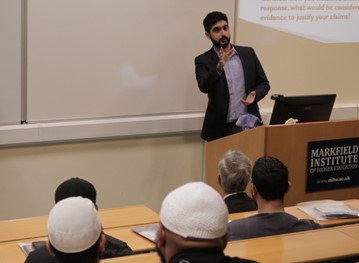